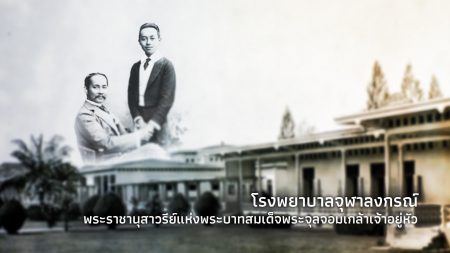 In the year 1901, during the reign of King Mongkut Rama IV, The Indochina Peninsula was being threatened by the Colonialism from the powerful countries: France and United Kingdom. And Siam at the time had lost the authority to rule Cambodia in the year 1826.

The colonialism war erupted again in the year 1892 when France marched its troops to invade Laos, which at that time was governed by Siam. The battle occurred causing a French soldier died and France referred this incident to invasively intrude the Siamese territory. Having been tactically disadvantaged, Siam urged for support from England to negotiate but the request was denied. Siam was therefore abandonedly isolated, resulting in the sense of war had spread all over Siam, according to the statement by The Lady Plien Phongsakornwong on April 13, 1893

“Now it was informed that the unrighteous foreign countries had threatened Siam by tricky exploitations, aiming to take His Majesty’s kingdom which shamefully disgraced the Royal Honor and national freedom”

Therefore, the Lady Plien Phongsakornwong persuaded the “patriotic relatives, fellows and female friends” to joined the voluntary fund raising in order to establish the ‘Red Cross Council’ for national support. The Council provided medical care to the army and people being injured in the war, while it also managed to supply medicines and medical equipment to all army departments. Her Majesty the Queen Sawangwatana Phra Ratchathewi was nobly invited to lead as the ‘Motherly manager’ and Her royal Highness the Queen Saowapa Phongsri. Phra Woraratchathewi as ‘ the Council Minister’. Her Majesty the Queen Sawangwatana Phra Ratchathewi had pledged to His Majesty the King Chulalongkorn and the King responded, “ It was a good initiative and suitable at all cause to be the national role model.” As the result, the ” Red Cross Council of Siam” was officially established under the royal permission on April 26, 1893, deemed as the commencement date of the Thai Red Cross Society.

Her royal Highness the Queen Saowapa Phongsri. Phra Woraratchathewi, the Council Minister, had pledged to His Majesty the King  Chulalongkorn to be the ‘ Supreme Council Patriarch’ (or the Royal Highness of the Siamese Red Cross Council’ on May 22, 1893. His Majesty had donated his personal finance as the first fund raising for 80,000 baht with an official Royal Statement to ensure of the Council establishment that, “ A life and property of my own is unitedly with Siam and I am pleased to give without possession. “ In addition, the King Chulalongkorn had allowed the palace of Krommuensuan Sivilavas to be expropriated and to be immediately built as the Red Cross Council Hospital in June,1893.

At that time, the situation was extremely conflicted when France observed Siam being under diplomatic and army disadvantage. French army then managed to send the authorized special envoy and the warships for diplomatic negotiation with Siam Government at the delta of Chaopraya River in July 7, 1893. The action misunderstandingly caused the fighting and many Siamese soldier had lost their lives. The ” Red Cross Council of Siam” was abruptly established as the Emergency Hospital at Mahathat temple, in order to predive medical aids to the soldiers and injured people. France sharply commanded Siam to give all the territory at the left side of Khong River within 48 hours but the command was denied. French warships were then relocated to place at the Chao Praya delta in July 26, 1893. Siam agreed to sign a memorandum to grant all the land last at the left side of Khong River to France in October 3, 1893. At the time, Siam had lost 143,800 square kilometers and more than 600,000 citizens, including a fine of 3 million francs, being paid with all the savings of King Rama III, called “Red bag money” for this national redemption.

When the war subsided, The Red Cross Council of Siam Hospital continued to provide medical care to the public by the Royal doctors from the Medical Department. However, the hospital was located adjacent to the construction site of the Royal Cremation for the Crown Prince Mahawajiruhis. So the hospital had run its operation for 7 years until it was permanently closed while the Red Cross Council of Siam continued its service.

In February 13 1906, King Chulalongkorn wrote to His Majesty’s one of the sons, Krommuen Nakornchaisri Suradech,the commander of the Army Department: “… Red Cross Council of Siam is not active. May the Army Department considers to operate or deploy the representatives to hold a meeting. ” Later, His Majesty was traveling to have a medical service in Europe. Krommuen Nakhonchaisri Suradet had informed His Majesty Crown Prince  Maha Vajiravudh that,

Somdej Krom Phraya Damrong Rajanuphap stated at the meeting of the Council in May 23, 1907 that, ” His Majesty the King Chulalongkorn has the intended to establish (the Red Cross Council of Siam) for the country“. By the way, the Project had not been proceeded when His Majesty the King Chulalongkorn immediately passed away, at the age of 57, on Sunday, October 23, 1953, at 2:45 am at the Throne Hall of Amporn Sathan, Dusit Palace.

Not until November 23, 1910, after a month of King Chulalongkorn’s death. His Majesty the King Mongkut granted His personal finance for 5,800 baht to establish the Red Cross Council of Siam Hospital. All of His Majesty the King’s siblings voluntarily joined the fund raising in total of 122,910 baht. While His Majesty the King Mongkut had supplemented the Red Cross Council of Siam’s initial fund for 391,299 baht, 98 satang. With this fund, the King Chulalongkorn’s personal donation of 80,000 baht was included. In order to attain this Project, Kromluang Nakornchaisri Suradech, the Chancellor of the Ministry of Defense, the 17th son of King Chulalongkorn, was responsible for the Hospital Construction.  And It was considered as the largest and most modernized hospital at that time.

His Majesty the King Rama V, opened the Hospital in May 30, 1914, and He granted a royal speech on occasion of the hospital opening that

“ To perform the merit-making to the King Chulalongkorn, it is needed to keep remind how to pay homage to the King’s greatest mercy even after his passing. I’m wondering if there is any possible way for the King to recognize how the King has committed many benefits to His people all through His Reign… It is then agreed that the hospital to be established as the Royal Monument in memorial remembrance of the King”

The construction of King Chulalongkorn Memorial Hospital, the Thai Red Cross Society, was accomplished in accordance to the wishes of the two great Kings under the 18 year continuous effort (1936-1924). The Hospital was therefore titled as

“The Royal Monument of the King Chulalongkorn” in eternal commemoration of His great benevolence to the Kingdom of Thailand.